A downloadable metroidvania for Windows, macOS, Linux, and Android

Toziuha: [to 'sju xa / toshiuja] (The meaning of this word is secret ;)

Toziuha Night is a 2D side-scrolling action platformer with features of a metroidvania RPG. Travel through different non-linear maps set in a dark fantasy world; such as a gloomy forest, demon-infested dungeons, a ruined village and even Count Dracula's castle. 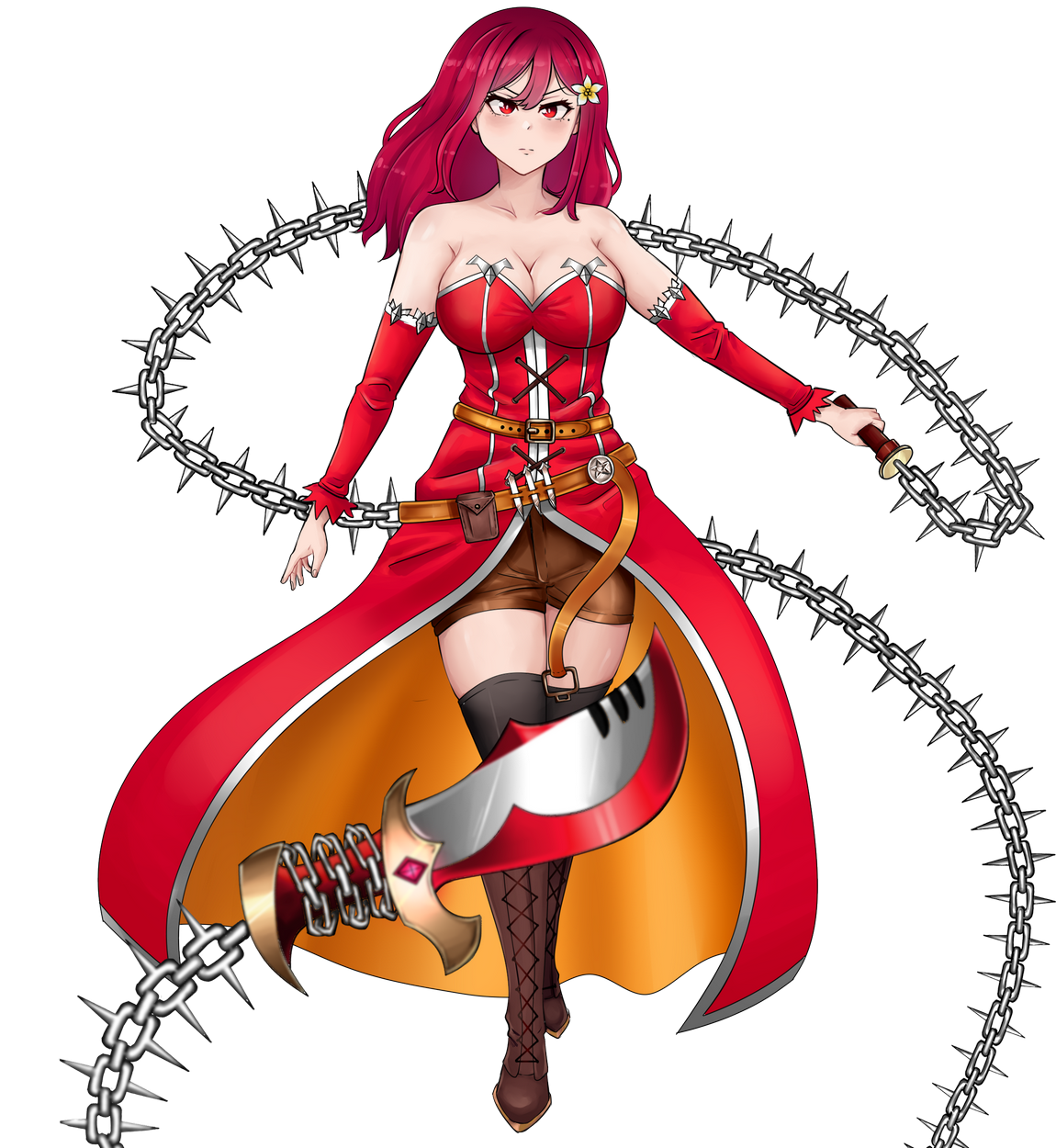 Play as Xandria, a beautiful and skilled alchemist who, using an iron whip, fights against the most fearsome demons and other alchemists seeking to obtain a millenary power. To accomplish her mission, Xandria will use various chemical elements to perform powerful attacks and spells.

Features planned for the final version:

Help me to fund this project with your donation!!!

If you have problem with macOS version:

Since macOS 10.8, Apple requires applications to be signed before they can be run. However, code signing is a paid process (costing a $99/year subscription, and more if you also want to publish to the Mac App Store).

More info about how bypass it here. I can't do more.

The game is a masterpiece!!!

thank you! the game is still in development!

Tbh, it looks like the woman is a bit cross-eyed on the title screen.

What OpenGL the game runs?

At Godot is it possible to change OpenGL from 2 to 3? Several games made with this engine don't run on my old machine, because an OpenGL incompatibility error appears, asking the devs, they say that the minimum requirements are just to have OpenGL2 that my hardware has. Your game is one of the few that runs smoothly.

I wonder if there is a mistake some devs are making when compiling games for OpenGL3 instead of OpenGL2...

Sorry for my bad English

Yes, it is possible to switch from OpenGL-2 to OpenGL-3 or vice versa. But it may cause some errors (most of them are always in 3D).

In fact I have uploaded a video talking about the OpenGL version change and what problems it can bring.

When will the last free beta be? I plan on getting the full thing, I just don't want to play through any of the content 3 times.

thank you very much for your comment! On Monday March 23rd the first part of the game will be released on Steam and Itch.io will be a short classicvania, and the money from the sale will go to continue funding this metroidvania! Follow the game's social networks so you don't miss it!

I really like this game, it's not that easy to play, very challenging, this is a difficulty i like to play.I really recommend everyone playing this game, you have a lot of skeletons, bats and heads. I made a video if someone is interested in playing this game.

Metroidvania is a gender that will never die... And you made a great job on this one! I loved that it has even the Portuguese language option :3 Keep the good work ^^

I downloaded this game, as part of a bigger way of testing the value of Itch.io's Gamepad (Any) input category.

This game does a nice job of supporting Xbox 360 controllers, and it even adjusts its button images around it.

Unfortunately, if you plug in some other kind of controller, the game will still see it, and try to impose a control scheme on it, which is a clumsy process to get around.

I don't have any problem with games having built-in controller support, per se, but with this game, there's no way to disable the built-in controller detection code. I would've preferred the game to not include any controller-recognition functionality, because that would've actually made it MUCH more controller-compatible, given that controller profilers do exist.

thank you for your comment i will take note about it

All of my Itch.io tests are done on a PC. This game will take any controller it recognizes, and try to attach its moves (not only) to Xbox controllers, but also any controller, based on generic notations (like POV, Axis, Button 1, Button 2, etc). I don't necessarily mind these impositions per se, but, if I can't disable this automatic recognition, I have a problem with that.
Traditionally, PC games would have separate Keyboard and Joystick modes. If this game had that, you could use the Keyboard mode, and then create a controller profile (with something like JoyToKey) and get total control over your controller layout, down to the last button. This would work for even REALLY weird controllers, like racing wheels and flight sticks.

Dude this game is amazing! it has all the elements of a metroidvania but above all the soundtrack is brutal! I am very anxious for the game to reach its final version, it is incredible. If you like you can watch my gameplay
👇👇👇👇👇

Played the game and so far I can see the potential. Looking forward for you to keep updating it until it become a full release^^. Tho I think a bit of achievement is a nice touch Idk if it is possible to add achievements tho XD.

thank you! the achiviements will be implemented on the latest phase of development :3

"This is a metroidvania style game where you don't need to farm."

This is kinda sad for me, is one of the aspects I loved about modern Castlevania games (and we can tell you got inspired on Order of Ecclesia, which is sadder for me that you can only use Whips?)

And yes, The main weapon is Whip, although I'm thinking could make several whips with different properties

So in a way it is like in Castlevania 2 where it is first introduced the various whips?

yep, that could be the idea

I currently don’t have a pc (and I’m on iOS) so I really hope to see this one on Switch or iOS!

Unfortunately, I am unable to contribute any donations, but I hope the project goes through to the end, I tried the game, I found it amazing, I saw enormous potential, and I would be sad if it was wasted,I wish you good luck with your progress, I will be looking forward to the final version.

A hug from Brazil :D

Thank you, i will take a look at how to use butler!

It seems like the download for Mac is broken, it keeps on saying that the application is damaged

you extracted the zip file? I uploaded an alternative file

Thank you for trying. I have investigated and apparently it is a security lockout: Since macOS 10.8, Apple requires applications to be signed before they can be run. However, code signing is a paid process (costing a $99/year subscription, and more if you also want to publish to the Mac App Store). So I cant do more, i'm poor dev xD more info about this problem (and how bypass) here: Disable Gatekeeper on macOS Catalina (10.15) (disable-gatekeeper.github.io)

Difficulty curve for the non-boss game is good.

Enemies all do quite a lot of damage. Save points are very frequent. Why not just decrease damage and get rid of some save points? It's more interesting to be forced to press on with some damage, than to just forget about it and respawn many times.

It is very hard to hit a whip-swing point, with a vertical straight-up whip attack.

Green alchemist's hitbox seems to be too big, particularly during her dash attack.

Boss damage is severe and they have a lot of life. This makes them feel more grindy, like normal enemies with a large simply numerical advantage, than bosses. That may be "true to form" for this genre, but it feels like imbalance.

Thank you for your comment, this will help me a lot to improve the game :D

HI! You can send me email to : dannygaray60@gmail.com

This is great ! Good job

great game! I hope to see more from this project but given how difficult I find some of this game, I probably won't finish this demo for a while.

The game is good, but the filter feels like a way to hide the graphism instead of a real choice of game design.
Everything else goes from just okay to great.

This said, the hidden boss glitched on me, and stopped moving for like 75% of his life points for no reasons.

Really great metroidvania! It is featured on my Week's Top 5!
Check my video!

Reply
Hikiyami Moriko pixelated Vtuber1 year ago(+1)
Really nice Castlevania-like game, it has a bunch of classic mechanics but also a lot of new stuff like the alchemy for the whip; the story is also really interesting for what I could gather and the pixelart looks really nice in both enemies and background (Tho I am not a big fan of that filter that's over everything).
Reply
Danny Garay1 year ago

Thank you for playing  UwU

Danny, this is good stuff, keep up the good work bud

So how did you know the name of the anime?

I searched on google lol (I thought you meant a game)

I want to thank you for this gem of a game. I'm a huge Castlevania fan and this hit that sweet spot. I cannot wait for the full release of this. Keep at it!

thank you, I appreciate it ! 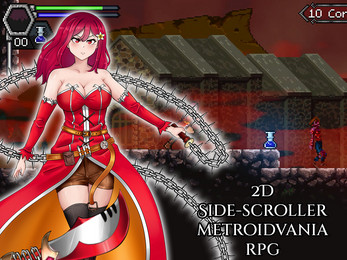